How Many Short Stories Did Edgar Allan Poe Write? 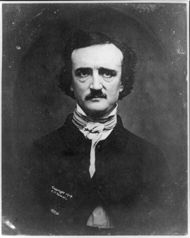 Among the questions asked at the Big Read kick-off last week end was "How many short stories did he write?" Seemed simple enough. "We'll look it up and get back to you." No problemo!  Ten books, fifteen websites and several long distance phone calls later - and we still do not know the answer with any certainty.
"Almost eighty" it says on page 373 of the official volume of the Big Read. The Edgar Allan Poe Society of Baltimore says the number is sixty-nine - counting "both short fiction and novels." This appears to be the most widely published number.
So how many short stories did Edgar Allan write? Only the Poe himself knows for sure.
Posted by Massillon Public Library Reference Department at 12:31 PM